Winter is not a great time to grow plants but in mid-autumn I planted a bunch of broad-beans on the advice of a mate. Had no idea what to expect. The first thing that happened was that the pot got infested with ants. I have a lot to say about ants @$$$£$^&*&! At my Buddhist/Zen best I want to let them be because they are fellow creatures. At my human depth I want to kill each little bastard individually. These ants ate my egg plant and chilli plant in the summer. I’ve never known ants to eat chillies, Indian chillies too. They got into the pots and fed on the roots. I got one, ONE, brinjal and a mere handful of chillies. I love my plants. I love potting them, watering them every day, talking to them, touching them, feeling them…get the gist? And this was no time to be Buddhist. For my first attack I got ant/insect spray from the supermarket and sprayed it all over my balcony and around the back door. There was respite and I rejoiced. Round one to me. Not for long. I discovered they had snuck into the broad-bean pot and were proliferating. When Arjun was facing his cousins, the Kauravas, at Kurukshetra, wondering how he could kill them, Krishna, his charioteer said that sometimes the call of duty is greater than brotherhood. So the call of seeing my plant actually bear fruit was bigger than love for those little buggers. It was all out war. The enemy had to be killed with the deadliest Weapon of Mass Destruction. Ant Sand, supposedly safe (for humans). I sprinkled it all over the pot on the soil, around the plot and into the gaps in my balcony. There was no escape! I am pleased to announce the enemy has been destroyed 🙂 The war has been won, no insurgency expected. The plants are flourishing, thank you. They’ve flowered and the beans should not be far behind.

Meanwhile the Calendula and the Lemon Grass are doing very well. The LG was plucked out from another garden and by the time I drove home and potted it, it was as good as dead. This was towards the end of the summer. Then a mate of mine, the same one who gave me the broad-beans, said I should keep the faith and keep on watering it, coaxing it.Used in my Thai curry chicken some weeks ago.

My fenugreek (methi) experiment has failed though and I’ve got a mere two shoots. Keep trying, keep trying, that is mantra. I love gardening and having plants around me, some flowers, some food, some decoration, some edible. I think I should feed it some supplements. Next on the agenda is to plant strawberries and flax. Let’s see how that goes. Yeah it is not strawberry season. Yet.

One last thing. That can happen only in Auckland (or New Zealand). Last month I went to my old street and plucked all the red guavas I possibly could from the tree that everyone ignores. Only the rare person in that neighbourhood cares about this free kai (food in Te Reo Maori). Delicious little red guavas that I never knew existed. I was only aware of the green variety back in India. Here’s a look at the beauties. 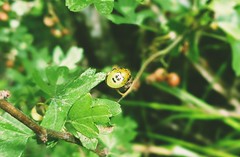 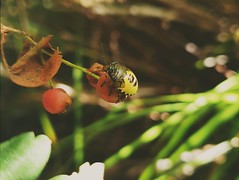